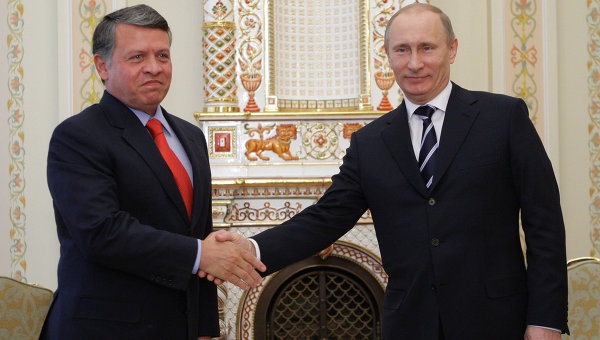 Amman has good reason to draw closer to the Russian-Syrian camp and resist the lure of Trump’s new Iran-bashing alliance
Following consecutive visits by Jordan’s King Abdallah to Moscow and Washington where he met the Russian and US presidents, Jordanian warplanes were ordered back into action against Islamic State (IS) after a pause of more than a year.

They launched airstrikes against the Khalid Ibn al-Waleed Army, the principal surrogate of IS in the Deraa district on the Jordan-Syria border, destroying a military position the group had seized from the Syrian army.
Many questions are being asked in Jordanian and regional circles about the cause of this surprise turn of events.
For the past six years, Jordan has tilted towards the armed Syrian opposition. It provided training to opposition fighters at the behest of the US, and hosted the Military Operations Centre (MOC) from which representatives of American, European and Saudi intelligence agencies oversee and coordinated military operations deep inside Syria.
But a number of new factors have come into play, forcing Jordanian decision-makers to reconsider their position and make good-will gestures both to the Syrian regime and its Russian allies.
First, they now accept that Syrian President Bashar al-Assad is likely to remain in power until after the next presidential elections in 2021. Indeed, the Russian-proposed draft constitution for Syria would allow him to run for a further two terms.
They are also convinced that the next front in the Syrian army’s war against the armed groups — after recapturing Aleppo with Russian air support and Iranian and Hizbullah backing on the ground – will be in southern Syria around Deraa.
In the meantime, large numbers of fighters from factions affiliated to the ‘moderate’ Free Syrian Army (FSA) have joined the newly-formed Tahrir ash-Sham coalition led by the Nusra Front, which is deemed by the Jordanian government to be a terrorist organization.
This has forced Jordan to make up is mind. It now feels that the presence of Tahrir ash-Sham in Deraa poses a threat to it on its northwestern border, especially with the growing likelihood of the new organization cooperating with IS. Jordanian media have increasingly been sounding the alarm about Nusra and likening its behaviour and atrocities to those of IS.
In other words, the undeclared truce between the two sides has collapsed.
Jordan is also increasingly concerned about growing IS influence in the Rukban and Hadlat refugee camps on the Syrian side of the northeastern border. The two camps house over 100,000 displaced persons mostly from outlying desert areas.
The Jordanian military command is intent on not allowing the country’s border with Syria, which stretches for over 400 kilometers, to be used to mount attacks inside Jordan by IS and at later stage Tahrir ash-Sham.
The latest Jordanian airstrikes also aim at preventing the Khalid Ibn al-Waleed army from reaching the borders of Israeli-occupied territory. That could lead to clashes with the Israeli army, further complicating the situation on the southern Syrian front. It could also bolster the standing of the group and its hardline ideology, which has a substantial base of support and ideological empathy within Jordan.
Regional politics also figure in Jordan’s considerations. The Jordanian political elite increasingly despairs of the Gulf states, especially Saudi Arabia, living up to promises to provide the country with badly needed financial aid. This makes it more likely that Jordan will draw gradually closer to the Russian-Syrian camp.
Jordan is a small country, in terms of both size and population, surrounded by big regional powers, all of which are mired to varying extents in internal conflicts and foreign wars or interventions.

Its decision-makers need to walk along multiple tight-ropes simultaneously, balancing awkward and heavy loads, without falling to the ground. That is a tough trick to perform, and may, in fact, be impossible.
The resumption of airstrikes against IS positions in Deraa and the support provided to the Syrian Clans’ Army in southeastern Syria — after the failure of the US-backed New Syria Forces experiment in fighting IS in Deir az-Zour and the Homs countryside – is likely to aggravate IS’ vindictive tendencies.

This could expose Jordan’s security to danger, as happened in the recent IS attacks in Karak.
The danger could increase further if Jordan opts to join the camp of the new US President Donald Trump who has begun to pick fights with Iran, and has found backing for his policies from Jordan’s allies in the Gulf, especially Saudi Arabia.
Jordan today faces tough and delicate choices given its critical economic situation and the fast pace of developments on the issues of Syria, Iran and Iraqi issues. Its political opinion-leaders need to consider carefully before deciding on the best –or the least damaging – options.