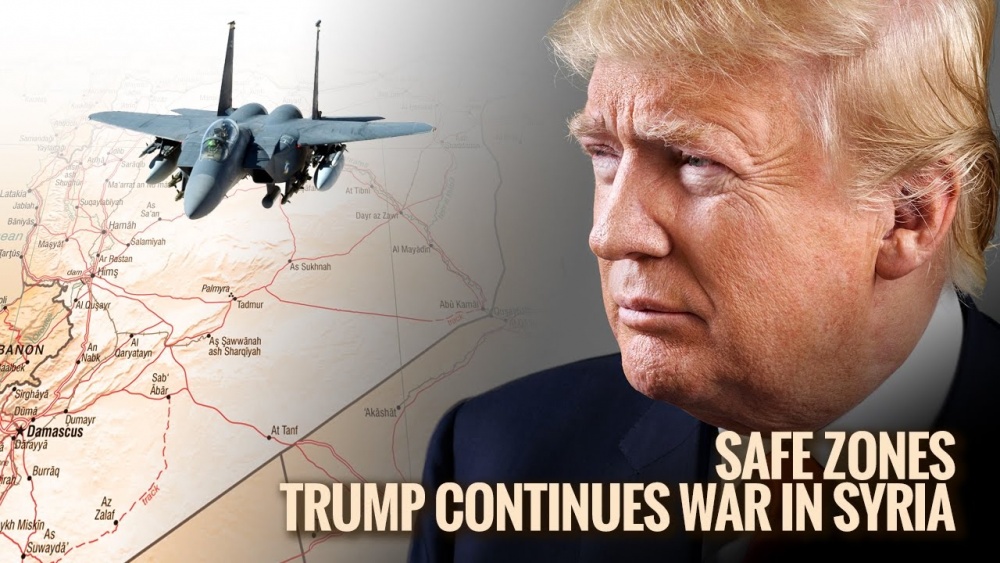 The renewal of calls for the establishment of ’safe zones’ for refugees in Syria has surprised many observers. There was much talk of setting up such enclaves during earlier stages of the six-year crisis, especially by Damascus’ regional adversaries keen to invite Western military intervention as a means of forcing regime-change.
But the situation on the ground has changed radically. Not only has the scale of the refugee exodus diminished. Syrian government forces backed by Russian air power have made major advances and recaptured Aleppo. Nusra Front fighters have left the Wadi Barada district from where they tried to cut off the water supply to Damascus. And the two largest armed opposition groupings – the Ahrar ash-Sham and Tahrir ash-Sham coalitions – are at each other’s throats in Idlib.
The idea of ‘safe zones’ is not new and has not gone away. Turkey claims to be trying to establish one in al-Bab and Jarablus north of Aleppo. What is new is the revival of the idea by US President Donald Trump, most recently during his telephone conversation on Sunday with Saudi monarch King Salman bin-Abdulaziz. According to the official US account of their discussion they agreed on the need to set up safe zones in both Syria and Yemen.
The Saudi authorities have been demanding that Iran stop interfering in the internal affairs of the Gulf states as a precondition for normalizing relations. This is hardly consistent with a policy of calling for the establishment of safe zones in Syria and Yemen. That would amount to a lot more than mere ‘interference’: it would entail the enforcement of no-fly zones – in turn requiring the destruction of the two countries’ air defences, communications and command-and-control infrastructure, and the deployment of substantial and well-equipped forces on the ground.
Syria’s foreign minister, Walid al-Mu’allem, warned that any attempt to establish safe zones for refugees and the forcibly displaced without prior coordination with Damascus would be unsafe, and would be a violation of Syrian sovereignty with potentially serious consequences. Speaking after talks with the UN High Commissioner for Refugees, Filippo Grandi, he urged all Syrians who fled abroad due to the war to return home, and promised they would be welcome, secure and afforded ‘all the requirements of a dignified life’.
Russia’s low-key response to the proposal was striking. After initially warning that a safe zone could worsen rather than ease the refugee crisis, Foreign Minister Sergey Lavrov said Moscow was ‘willing to study’ Trump’s initiative. But he added that ‘certain conditions’ needed to be satisfied, above all the consent of the government in Damascus for the establishment of these zones.
Damascus, naturally, will not give its consent. It is well aware of the implications of the American proposal.
The Syrian government fears a repetition of the scenario that unfolded in Libya in February 2011, when NATO – relying on US firepower to implement a plan devised by France and Britain – set up safe zones on the pretext of protecting civilians in Benghazi from a massacre that the Gaddafi regime was supposedly intending to commit. Enforcing these zones was used as the rationale for destroying the regime, which plunged the country into its current state bloody anarchy.
The same outcome was envisaged for Syria by Turkish President Recep Tayyip Erdogan when he remarked that after ‘liberating’ al-Bab in northern Syria, Turkish-led forces would establish a safe zone there as a prelude to bringing down the regime in Damascus. He later retracted the statement under Russian pressure, and it was deemed to be a slip of the tongue.
The establishment of safe zones would be seen by many as a prelude to a bid to dismember Syria into a collection of enclaves, emirates and autonomous areas based on religion or ethnicity. The Syrian authorities‘ fears and suspicions on this count will have been fuelled by the draft constitution proposed by the Russians to delegates at the Astana conference, some of whose clauses negate Syria’s self-identification as an Arab country.
It may also be no coincidence that all the talk of safe zones – with Trump raising the idea, Turkey welcoming it, Qatar applauding it, Saudi Arabia supporting it, and Moscow demurring – has been accompanied by a concerted campaign on social media claiming President Bashar al-Assad has suffered a stroke (strongly denied by the presidential palace).
When safe zones were established in Benghazi, it was claimed that the aim was to protect the inhabitants and ensure that Libyans would remain within their country’s borders. But millions of Libyans are now displaced, mostly in Egypt to the east and Tunisia in the west, many in severe hardship. And theirs was a prosperous country with massive oil resources.
No reasonable person could wish the same for Syria and the Syrians.