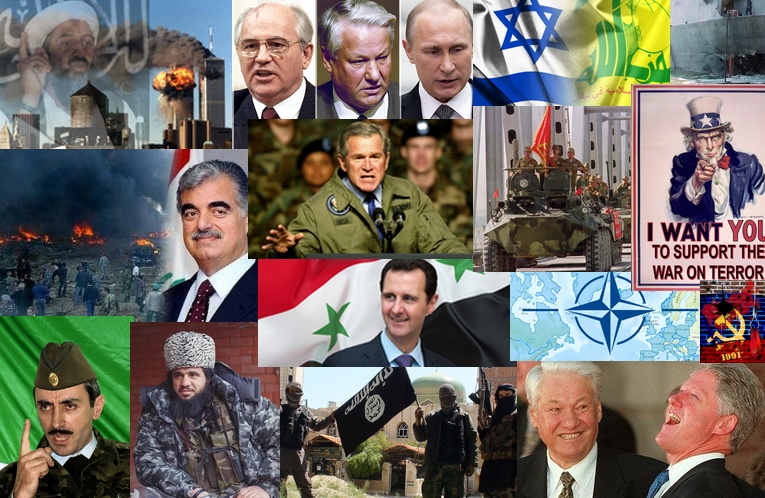 Honestly & probably it’s known that Syria was under direct warning from George W Bush’s administration prior to the invasion of Iraq, after direct requests was presented by many sides & delegates or directly from the US administration like the multiple visits of the secretary of state Colin Powell.

The US administration wanted from Syria to stop supporting Hezbollah in Lebanon & the Palestinian movement that are active against Israel & low its relationship with Iran.

Just like the famous speech of the US President George W Bush after 9/11 when he directly appointed to a specific countries & call them the axis of evil & said openly that a clear message to the world you’re either with us or you’re with the terrorists.

Despite the full cooperation between the Syrian Secret Service which they send & exchange information with the American authorities regarding terrorist acts & collecting information about suspects, but all that didn’t change the relationship between Syria & the United States.

So later on the plan to weaken or changing the Syrian government direction continued by the second attempt to which is started with the applying the law of Syria Accountability Act & applying sanctions on the Syrian government due the situation in Lebanon & the Syrian inferring there which is escalated after the assassination of the Lebanese former prime minister Rafik Al-Hariri & accusations pointed directly to Syria’s possible involvement in the assassination & forming an international investigation commission that later subsequent in all related cases in the Lebanese affairs events until the Syrian army getting out of Lebanon in April 2005 & the emergence of a large anti-Syrian political movement in Lebanon, in addition to the affected Syrian diplomatic relations with many countries which put Syria in nearly full isolation for a period of time.

After sometime also this plan didn’t achieve much in order to weakening & removing the Syrian government or forcing the Syrian leader to change his country’s directions, so the thinking went back again to the military solution, this time through an Israeli direct action against Syria, which was planned to be in late 2006, but Hezbollah’s operation in southern Lebanon & the capture of the Israeli soldiers in July 2006 put the attack plan on Syria in a big confusion & the situation forced Israel to push for solo attack on Lebanon to put an end to the presence of Hezbollah & end its threats to Israel’s security, sure is this new situation put the original plan to attack Syria directly away with replacing it by attacking the power wings of Syria through ending Hezbollah’s presence then trapping & weaken Iran, even induce political cross-regional game involving everyone by giving Turkey, Qatar a significant role in this plan.

All these incidents shows without a doubt the fragility that Israel has become, therefore it was difficult to subdue & submitting Syria to the west wing led by the United State by force which was for long time an objective for many US administrations that tried to change the regime or control Syria since the fifties of the last century either by threats & force or by rewards.

All of these events were taking place, while an important side was too far from the picture, this side is Russia.

The Russian Federation. the successor of the Soviet Union, the World’s super power, the nuclear Country that came out victorious in the second world war, which at that time were in a state of redeem itself to return back again to the International center stage.

The Russian Bear that was under heavy economical wounds & political weakness which leads it to be almost completely under the will of the United States during the Era of the Ill man Boris Yeltsin, the man that came to power after the collapse of the Soviet Union & the failure of the Barractroyka of Mikhail Gorbachev & the big fall of the Red Army in Afghanistan.

All these events exposed being the USSR to be declared the loser of the cold war the long time confrontation between the east & west that changed the world.

After the fall of Berlin’s wall & the fall of Warsaw treaty Alliance, with the big downfall of the communism & the socialism in the world, the United States with its NATO alliance remain the single dominated power in the world in every aspects.

After the humiliated defeat of the Russian Army in Chechnya in 1996 with the weakness & the confusion of Dzhokhar Dudayev successors to defend the independency of Chechnya with its likelyto be a national & religious moderated state with the penetration of the Mujahideen coming from Afghanistan, whom those are the nucleus of al-Qaeda & with their presence in the picture in Chechnya, the situation was obvious & become clear that the matter there will exceed a matter of just another new state get its independence from Russia & things stand at this point, while maintaining relations with Russia, but it has begun to outstrip the borders of Chechnya to the entire North Caucasus region at time that al-Qaeda & the stream of the jihadist extremism ideology began penetrates & appears in the Arab & Muslim world until it reached its pick with coming to the stage of direct attack on US interests in the whole world.

By the attacks on the US embassy in Nairobi & Dar Al-Salaam, later the attack on the American destroyer USS Cole in Yemen, leading to the events of 9/11.

While the United States engaging in its war on terror in Afghanistan then the war in Iraq, the new Man of Russia Vladimir Putin was almost in the same situation.

He attacked the extremists tide in the Caucasus in each of Chechnya, Dagestan & access to the entire North Caucasus with were stimulated, especially from the terrorist acts of the Metro Moscow bombings & the hostage incidents in a Moscow theater to the events of the Beslan school in North Ossetia & the attack on the city of Nalchik, the capital of the Republic Kabardina Balkaria in late 2005.

In Syria & under all these unstable world that is surrounded Syria & overweighting the shoulders of the new president Bashar Al-Assad, that many in Syria & the world puts hope on him to bring some sort of changes & reform in Syria & try to fix many cases that Syria was suffering from in order to insure more reforms & freshness despite the hostility around the country & a stack of event & incidents that hits the country since 2000 the year that Bashar Al-Assad came to power after the death of his Father Hafez.

We should realize that a thirty years weight of Hafez Al-Assad rule has been put on the successor Bashar by keeping Syria on the direction of being against the US dominion & resisting Israel & supporting the Palestinian cause & Hezbollah movement.

Sure is such task is not an easy one especially after the fall of Iraq with the American Army becoming right next to the border.

Besides that Syria domestically was in a strong need for a lot of work in order renew the way of governance & applying economical & social reforms to make the country suitable to handle all the surrounding changes & be able to come forward in order to maintain a prosperity & create more opportunities for its people for a better life in all areas.

All these events & the new elements that shacked the world & change the face of the entire region starts began to warn of upcoming which is the worse that still yet to come.