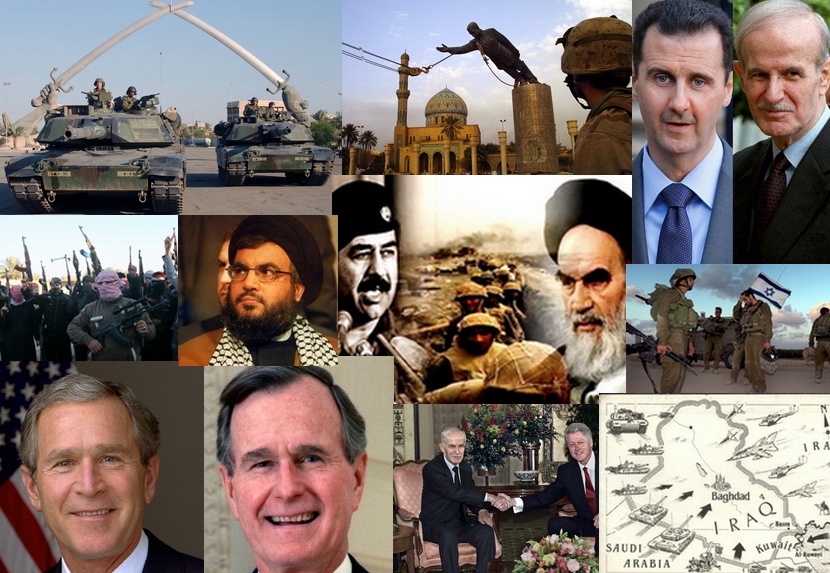 After the invasion of Iraq in 2003 & the fall of the regime of President Saddam Hussein with an almost complete annihilation of the Bath party in Iraq which I completely confident that Bath party days has gone for good.

With the US. Occupation of Iraq, the US army is on the eastern borders of Syria.

Syria the country that also ruled by the Arab Socialist Bath Party, a country which was for years one of the most important & major players in the Middle east & the world, under the presidency of the late Hafez Al-Assad, the leader Who had big ability & power of influence with big intelligence in the whole world, without exaggeration.

Syria, a relatively small country with an area not exceeding 185 square kilometers with an important strategic location in the heart of the Middle East & one of the most hawkish of the Arab-Israeli conflict, which is still have an occupied lands by Israel, the Golan Heights.

Syria has been for decades a real dilemma for a complete domination of the United States in the Middle East in particular, with unstable relationship between the two countries which are always characterized by ebb & flow, with the survival of Syria, alone in the Arab-Israeli conflict after the rest countries, such as Egypt, Jordan & the Palestinian Authority went towards peace talks that gave them something & took from them many things in my opinion.

With that & under these circumstances, Syria’s political leadership positions & the issue of the way to keep & save stability & steadiness of the country under all these changes which was extremely difficult.
With the fall of the Soviet Union in early 90’s, Syria had to know & realize how to hold the stick at the middle in its surrounded area with different atmosphere.

After the Iraqi invasion of Kuwait in August 1990, six month later the United States form an alliance from more than 30 countries to force Iraq to withdraw from Kuwait, Syria was part of that coalition to insure its domination in Lebanon & get promises from the US administration to launch a peace process to regain its occupied lands from Israel, probably that choice was made from the Syrian Leadership to insure its position in holding the stick at the middle & be part of a changing world to avoid becoming out of it.

We should remember also that Syria’s relationship with Iraq was severed since 1979 & there is no love lost between Hafez Al-Assad & Saddam, with that being said, Syria was not pleased at all from Saddam’s misconducts since his overthrowing the Iraqi president Ahmed Hassan Al bakr, whom was in a verge of union treaty with Hafez Al-Assad, in an initiative to unites Iraq & Syria under one Bath party leadership between the two leaders in which Saddam will be left out of it.

When the Islamic revolution broke in Iran, overthrowing the western world man in the region, the Shah of Iran, Mohammad Reza Pahlavi & Khomeini came to power whom was an ally of Syria as well, shortly after that the Iran-Iraq war broke out, which lasted for eight years.

There is no doubt in my mind that Saddam played this double role to impress the people of Arab world, to introduce himself as a hero leader who will liberate the Arabs & free the occupied land of (Al-Ahvaz region) aka Arabstan from the Safavids of Persia.

Saddam played very nasty game to offer his service to the US & the Western World to get vengeance from the so called Islamic revolution after the US Marines incident & the hostage crisis at the US embassy in Tehran, with the western world big loss of their man & the oil of Iran.

Saddam thought that by this move he might replace the Shah of Iran & become the new Western World man in the Region at the same time play the role of the savior protector of the Arabs.

First he went to the crumbling USSR & offer his alliance with them & to impress the USSR he nationalized the oil in Iraq & in the other hand he took the income from the oil nationalization to bring western companies to invest in Iraq?!!!

This game of money & financial interests that Saddam tried to play with the US & the USSR, later on, he fell victim under the same game, before the launch of Desert storm operation to get him out from Kuwait, When the Saudi Arabia paid 15 billion USD to the Soviet Union to ensure his neutrality & not support Saddam ‘s regime, also Saudi Arabia paid 4 Billion USD to Turkey to ease the economical loss that will occur due to the stoppage of Kirkuk oil pipeline from Iraq to the Turkish port of Cihan with Saudi promises to pay more in the near future to Turkey to equal the total loss that Turkey will suffer due to the oil pipeline stoppage that equal to 21 Billion US dollars.

Back to 1979 Saddam took the decision to attack Iran (If he was the one who took it, not being told to do it) in a very crucial time immediately after the Islamic revolution, knowing that Iran will be in a very shaking stage & weak situation.

Also the Weapons of the Iranian Army were almost entirely western, so under the new situation, the Army cannot maintain the usage of these weapons with needs for supply from the west which is the supplier & that explained why the war between Iraq & Iran was in favor of Iraq at the beginning, but then started to take different directions.

The entire war between Iraq & Iran, Syria was supporting Iran & tried to play a role to act as a mediator between Iran and the Gulf countries to ease the losses on them Gulf as much as possible.

Back to the Iraq invasion of Kuwait which I completely confidant that it was a calculated strategy from the US to shake things in the middle east & the Gulf region to create suitable situation for them to maintain their domination.

Syrian president Hafez Al-Assad actually sent a message to Saddam in one of his live speeches, telling Saddam that he must get out of Kuwait to avoid causing mess in the Arab World that will give the United States an excuse to enter the region to stay.

He said that Saddam’s act of invading Kuwait was not in favor of the Arabs cause to liberate their lands from Israel ((how we expect to demand the right of our occupied land, while one of our leaders does the same with his Arab neighbor))?

Iraq responded quickly by saying that they will not withdraw from Kuwait before insuring the right of Iraq incoming from fair Oil producing of OPEC & Israel withdrawal from the Arab occupied lands & Syria gets out from Lebanon!

During the desert storm operation to liberate Kuwait, Iraq launched 59 Scud missiles on Israel as a reaction to gain the support from the people in Arab world & embarrass Arab governments that have joined the alliance, specifically Syria & Hafez Al-Assad however the work didn’t left a mark nor brought the required.

in 2003 The US military has arrived in the borders of Syria at the time when the drums of war are still ringing in the US President George W. Bush’s administration, the fear of the New Syrian leadership of President Bashar Al-Assad was that the US administration might precipitate & go for an invasion of Syria, but it didn’t happen for a very simple reason, which the importance of not subjecting Israel to any threat or damage which is quite well be in case of any attack on Syria take place, Israel will experience the reaction which will not be simple.

For sure Syria & it’s army situation is not similar to Iraq in 2003 & the Syrian army’s potential with a strong Iranian alliance & the existence of Hezbollah in Lebanon, which force Israel to withdraw from south Lebanon I n May 2000 after a decade of fighting, all these elements are more than enough to ensure that Syria will not be exposed to what Iraq has suffered.

The United States & the United Kingdom implicitly knew that Iraq is no longer has what threatens Israel & the story of possessing weapons of mass destruction was just only a final argument to finish the work which put the end of the rule of Saddam Hussein.

On the eve of the American invasion in 2003, Iraq & its army was pitiful & helpless, so therefore the road will not be impassable to attack & overthrow its leader.

In the Syrian case, doing this work is impossible & potentially risky move, with no room for enterprising & wading in it.

With time passes the plan has changed & modified, with applying new long term political plan to weakening & falling the rule in Syria or change its direction.

This plan started the day after the occupation of Iraq, by inflaming & create some internal disturbances between Kurds & Arabs in eastern Syria.

Syria responded by somehow open the border between Syria & Iraq for armed insurgency to pass to fight the Americans with hosting some of the fled Bath Iraqi leaders to maybe start to create some opposition & help the situation in order to make Iraq to be an Unrest place for the Americans.

Many attempts took place in this matter by direct orders from the Syrian political Leadership & some under blind eyes not knowing that those insurgents will be weapons against the Syrian Government itself after 2011.