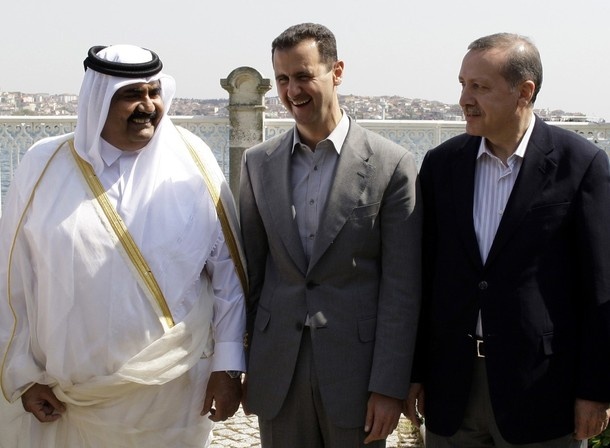 By entering the year 2017 the Syrian Crisis will enters the sixth year, along with the massive acceleration of events recently, a hope has emerged for finding some real opportunity to resolve & end this crisis.

I came up with a thought to provide a series of articles which will talk about & discuss the Syrian crisis & lists of some facts & hidden issues perhaps will give some answers to many pressing questions that have been through these years boggled many, these issues could’ve been known to some & some is hiding talking about them for different reasons.

Therefore we’ll start telling an Idea by these series of articles inside an environment of an approach associated with information, facts & conclusions with leave the door open for those who will read it to give their opinion & get inside to the core of this story.

I watched a quick interview three weeks ago with Syrian President Bashar al-Assad with an Italian journalist in Damascus.

I was struck by a question from that Italian journalist to President al-Assad regarding the topic of Qatar establishing & extend gas pipeline project through Syria before the uprising starts & whether the rejection of al-Assad for this project was one of the main reasons that led to what happened in Syria.

This project, which is to ignore the talk about being deliberately or out of ignorance is the real reason behind the entry of Syria among the countries ravaged by the Arab Spring.

Far from adopting positions between supporters nor the oppositions of Damascus regime or with passion of conviction with conspiracy theory which was always play the biggest role in explaining situations, events & pitied nor condemn the ones that were parts of these events.

I will not go in my research about these things because it sets an endless doors that leads to endless trends.

Well there is the full story from the very beginning & letting you the free chance to adopt or modify anything on it but I can assure that my sources in this story are true & there are no doubts because they were too close to the decision-making center and some of them were in it & they witness it by themselves.

Our story begins in 2002 with the arrival of the Justice & Development Party to power in Turkey which turn the page of shaky governance & the weakness of the political & economic stability in Turkey.

A man has appeared, one of the followers students of Necmettin Erbakan the famous Turkish political leader & who was leading for years the political Islamic wing in the country that follows the line Kamali ((Attaturk)) secular system emerged from military coups best known the third coup in Turkey’s history wich was the one of General Kenan Evren coup in 1980.

Turkey’s with its ancient history and way past linked to the Middle East region & the ancient world because of the 625 years of Ottoman rule, Turkey, the country that is full of mosques & ancient monuments associated with dates in immemorial history, Turkey that most population are Muslims, Turkey with vast majority population are predominantly conservative & committed to the Islamic faith in spite of the secular state that have caused a great contradiction in the issue of the actual identity of Turkey between a secular civilian state or conservative Islamic state.

In This very Turkey Recep Tayyip Erdogan appeared to steal the hearts & minds of the people not only in Turkey but in most parts of the world, particularly the Arab & Muslim world.

In the other side prior to that period specifically in 1996 in the State of Qatar, a small state in the Gulf that blessed with great financial prosperous support due to big oil & gas production & culminated this appearance with the launch of Al Jazeera News Channel, which turned in few years to a big news & media network that reached its strength & fame all over the world.

The emergence of Al-Jazeera’s Channel with its contents which was new & revolutionary in the Arab & Islamic world as a great shock & shake the whole world in general & the Arab world in particular & it highly contributed to show the small State of Qatar as a major player & known effective state, why not Qatar also host they The forward headquarters of United States Central Command, headquarters of United States Air Forces Central Command.

At the end there are no completely free media in some put this media will take sides at least based on its funding sources.

The idea of the role of Qatar and it’s Jazeera & Recep Erdogan & his regime in Turkey, a striking similarity in the ways of rise & gaining trust & support of the people until the end access to the desired goal in a timely manner.

The none stopping continuous work & efforts for years to gain the trust, support & sympathy of most of the Arab and Islamic world by gaining support through working of the direction which affects the vast majority of the people in the Arab & Muslim world which is generally controlled by emotions & intolerance without thinking deeply enough, such as the Arab-Israeli conflict, the Palestinian cause & support the resistance against Israel in both Palestine & Lebanon, covering the events that shook the public & position them since the American operation in Iraq, called Desert Fox in 1998 to the Israeli defeat & withdrawal from southern Lebanon, Al-Aqsa Intifada in Palestine in 2000, leading to 9/11 2001 then the invasion of Afghanistan, which the channel took a direct American attack, to the invasion and occupation of Iraq 2003 & also the channel was attacked directly by the American forces, then the war in Lebanon in July 2006, the Gaza war in 2008 & many other events that made Al Jazeera a genuine & Highly trusted source for news & information in the Arab & Islamic world simply because it speak the tongue of the people & their hopes.

Al Jazeera also was a trusted reliable media sources for al-Qaeda & the source of broadcasting their tapes & the Mujahideen messages to the world & It was the channel that bin Laden made an interview with which was the first & only one.

All these factors was enough to make Al Jazeera the desired & beloved for most Arabs and Muslims to get news & information & adopt a certain direction or opinion.

Mr. Erdogan also has the same role His work on the development of Turkey and reforming economies in a very short time to make Turkey a model & a dream of all Muslims & Arabs as if all of who ruled Turkey before were inexperienced or have lake of capabilities, including his mentor Erbakan, only Erdogan alone knew the disease & the cure of Turkey in too short time that didn’t exceed five years?

The positions of Erdogan’s anti-Israel & supporting the Palestinian people in spite of the existence of a diplomatic relations with Israel despite its coldness in different stages. In addition, it has been a way directed his government towards the Arab & Islamic countries & Turkey’s neighbors of the historic dispute with them & work to resolve all the problems with the neighbors through the policy of zero problems to open a new page of cooperation, friendship & brotherhood, in contrast to all who ruled Turkey before?

All of these activities made Turkey’s Erdogan & Qatar Hamad bin Khalifa al-Thani, who has turned against his father & seized power in Qatar in the same period in which Al Jazeera launched, made the two a very trusted & reliable parties that trust & respect worthy.

It remains to mention regarding Al-Jazeera channel, that most of the founding staff and their media stars are prominent journalists are students of the British BBC School (the Arab section of the BBC, the rightful heir of the Voice of Britannia the lower east colonial radio) ex-employees with most of them hold the British citizenship as well.